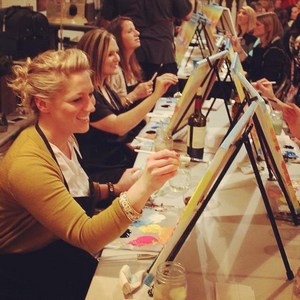 The refuge for refuse

“I’ve learned so much just talking and bonding over junk,” says Amber Cardona “Some people bond over coffee, I bond over rusty galvanized junk.”

Slightly Vintage is the place for junk, but not junk in the traditional sense of the word. It’s junk with value, junk with history, junk with a purpose hidden deep inside its raggedy old bones.

Or as she describes it, eclectic shabby chic rusty galvanized junk with a bit of elegance. Her description is a mouthful, and yet it hardly begins to describe the value of her wares.

Amber and Ralph Cardona own Slightly Vintage, a rustic looking venue on N. Calhoun Street. Part of a personal goal to help to beautify downtown, it’s a bit of the old mixed with a bit of the new.

From the outside, the recently redone storefront is a shining example of what a few touch-ups can do for presentation. On the inside are more examples of the exact same idea.

Actually, those are just a few of her things.

Some of it is for sale, some of the personal pieces are for show. Either way, to Amber, Slightly Vintage is as much a hobby as it is a business.

“It’s like a boutique, but I’m the person who redoes the furniture,” she says. “Other boutiques may just look in a catalogue and say ‘That looks nice, let’s order it,’ but I pick it, I paint it and I display it.”

Amber has lived in West Liberty for 11 years while her husband Ralph has lived in town all his life. They’ve been married for 10 years and have three children: Jonathan, 8; Vivian, 7 and Madeline, 3.

They purchased the property from Weiss family during an estate sale. Amber had her eye on the property for years, helping decorate the windows of building for months.

Slightly Vintage officially opened its doors in 2014 with a ribbon cutting ceremony, where the couple invited the community in to take a peek inside. It’s given her a chance to carry on with her passion.

“I grew up fairly poor, without a whole lot, so you always have to think of another way of using something, or being creative,” she said.

“It’s just something to do, because I’ve always done this,” she adds. “Basically my husband was like you’ve got to move your stuff out of the garage…but I still have stuff in the garage.”

Amber isn’t a picker per se, more of a spotter. Whereas television personalities go out looking for treasure, she just happens to spot it when she’s already on the road.

That’s when she’ll hop out of her vehicle and search through an old barn, a garage sale, or whatever may have caught her interest. She may not be looking for old stuff, yet she always finds it.

Thus, Slightly Vintage deals in anything with a classic vibe, while also presenting and selling products from small town/small business lines.

However, after talking with Amber it’s easy to see she has the drive to not just promote her business, but the entire downtown district of West Liberty.

“This store has helped me build relationships within the community, which are huge because they make the place you live desirable,” she says.

Slightly Vintage was crammed with local products during the Chamber’s Holiday Stroll, all of whom Amber personally invited.

Most recently, it hosted Brush and Barrel, the social painting experience, based out of Coralville. Around 40 women showed up Saturday, Jan. 31, to socialize and create art while eating goodies.

Amber also spends her time helping out other small town businesses, such as her neighbor Henderson Upholstery, owned by Chuck and Louise Newcomb. She painted the outside of their building a bright and vivid red last summer.

Slightly Vintage is about taking the old and making it new. The business is carrying that same philosophy into its interaction with the downtown. It’s riding the improvement wave, taking as many along for the ride as possible.

“It’s just thinking of things in a different light,” she says “You’re not looking necessarily at the object but all angles of it.”

Whether she means downtown or the products inside Slightly Vintage…there isn’t really a difference. 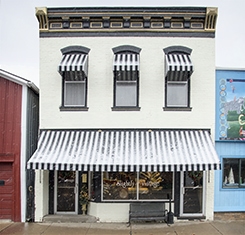